Alamo Power is a non-profit General Improvement District under the Nevada Revised Statutes (NRS) 318 of Nevada’s state Legislative Act of 1987.

Alamo Power District No. 3 (APD3) was created in 1936 after the Nevada State Legislature passed an act that provided for the creation of power districts.  Lincoln County Board of Commissioners appointed W.T. Stewart, Joseph S. Cox, and M. A. Bunker Jr. to be APD’s first Board of Directors.

The new Board of Directors begin the process to work with, recently established Lincoln County Power District, on getting cheap electric power to residents of Pahranagat Valley and the community of Alamo.  Later it would expand to serve the community of Hiko as well.  A single substation was established near the newly constructed Lincoln County Power line south of Alamo about 15 miles.  The first power line into Alamo was a single phase 7200-volt power line.  Later in the late 1950’s the lines were upgraded to 3 phase and voltage increased to a 25000-volt system.  Electric power in the communities allowed residents to pump water more easily, light there homes more easily, and have the opportunity for modern conveniences of the time.

APD3 service territory incorporates the entire Pahranagat Valley area.  The area is about 45 miles long and 5 miles wide.  APD3 has approximately 750 meters varying from small residential service to large irrigation services.  APD3 has one office in Alamo, Nevada which is in Pahranagat Valley about 100 miles north of Las Vegas.

APD3 has made robust changes in the past few years to enhance system reliability and to transition into the modern world of energy delivery.  APD3 will continue to make efforts to provide safe and reliable energy for years to come. 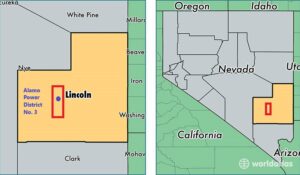